A dog seatbelt and some PVC pipe and a really strong rope. - Gratitude Gate 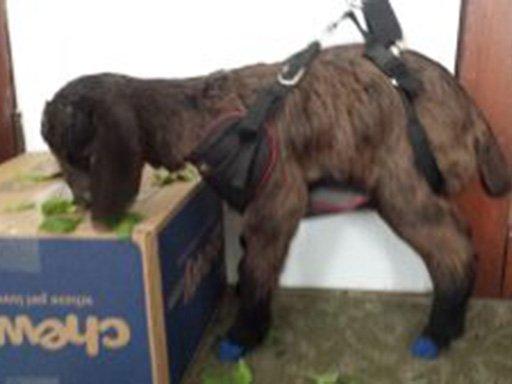 So we all know there isn’t a huge demand for goat harnesses out there, especially ones designed to help neurologic goats learn to walk.  So we had to come up with something practical and get as close as possible to allowing Rocky to have natural movement.  I have seen a lot of different types of slings, mostly for dogs. A lot of these slings or harnesses put far too much pressure on a Goat’s rumen (stomach)  and the trachea (windpipe.) For the large amount of time Rocky will need to be in this harness daily, this was not going to work.  I tried a custom padded sling, a baby harness that the parents wear and just about anything that could comfortably carry weight, I tried or planned around.  I have to give the credit completely to my husband on pulling out our 12 year old Rottweiler Mix’s seatbelt.  It was everything we needed. All of the weight needed to be balanced could be done with this simple harness made for a big dog.  It would be put on the very same way as a dog, but has several areas you can adjust size along with where the center of gravity will be for the animal.  The weight on the front of the chest is supported over the shoulders and the lower chest is supported his underside.  My husband climbs trees for a living, so he is pretty good with life saving knots and fancy clips and ropes.  We had a hefty carabineer hooked to his harness and then to a knotted rope with a loop.  This made it so I could fully support Rocky and show him around or “hook him up” to an area where I can work with him free handed.

It all came together great and once again, Rocky showed us he was not content without doing it own his own.

So then I drew up a cart one that unlike a wheelchair with support underneath but instead suspend him and allow him to feel his own movements made by his very own decisions.  At 21lbs, Rocky wasn’t that heavy but have enough that we had to create a suspended support that could handle his weight while still allowing flexible motion especially with his growth.  At the farm Gratitude Gate is currently located we have the use of a large intact dairy barn. The isles that held the cow’s stanchions (stalls) were made of smoothly laid cement with large steel support

beams that run vertically down the isle.  My husband, Don, took 2 4×4 posts and drilled holes in both, placing one at either end of an isle. He then rigged one of his tree climbing lines with a bunch of fancy things and cinched it very, very taught. We had gone to home depot and bought the supplies needed to create the cart I had drawn.

Put on castor wheels, it glided smoothly over the concrete. We placed a swivel on the center bar of the cart that allowed Rocky to turn around and go in both directions without needing assistance.  The very first time we set him he just blew us away.  A week before he couldn’t even stand on his own and is now grazing for 2 minutes at time and now actually going through all of he motions of walking!!! I don’t have human children but, I can tell you this was the equivalent to watching your child taking his very first steps.  We were just in awe again over his will to keep fighting to do more. Success was definitely in this little boy’s future!