Ok so you can manage 4 legs and fur. How about 2 legs and feathers. - Gratitude Gate 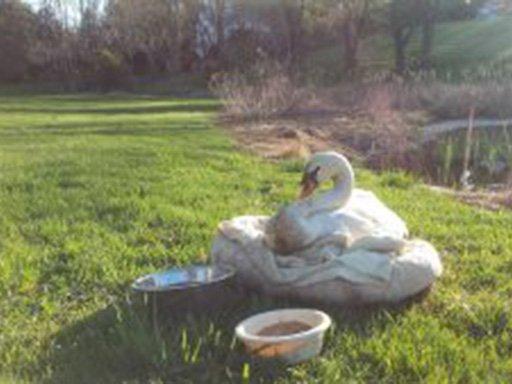 I have a long history with Bucks County’s wildlife rehabilitation canter, the AArk. Yes spelt with two A’s. I grew up directly across from their first location on Twinning Bridge Road in Newtown. The founder would sometimes let an owl rehab in our back yard or stay in my playhouse that my dad built. I started young with a love for all creatures and their purpose. Many years later when I was 18, the AArk relocated less than a 1/4 mile away from where I was living. I was so excited to work with wildlife and expand my knowledge in some of the different species found in our area.

For 7 years I volunteered my time with AArk, helping with the rehabilitation of endless lives and having to make very hard choices for others. I created a great bond with one of my supervisors that had known I had recently opened the farm sanctuary. She called me up about a swan one afternoon in early April. Brought in hit by a car early in November, the young male swan had no use of the back legs. No fractures to the wings or legs where felt at the time and the decision was to treat as a soft tissue or spinal injury and rehab after rest. They tried to locate an owner for the swan as most of the birds in our area occupy local residential ponds. Mute swans are actually not native to the United States at all. No one stepped up to claim him so they continued to let him heal in hopes of returning him to a new home once he could walk again.

The months between November and April went quick and when Kathy called, I knew she had a patient of concern. April is the beginning of full on baby central at the Aark and it takes a village to help them all. Kathy wanted me to come down and take a look at their swan and see if we would be able to take over his rehabilitation. I know what it is like their in the busy season and as Kathy also noted, there won’t be enough time to give him what he needs. So even though I told my husband I wouldn’t be coming home with a swan, I did. Along with a flying squirrel and pigeon to release on the farm. I am so lucky he tolerates me and loves every animal I bring home as unconditionally as myself.

Swans are known for their bad tempermant but it was quite obvious that Mr. Connery was very used to people at this point. Making the first step in building trust in order to help him, much easier. I brought home his own little cart they made for him that looked very similar to Rocky’s. He had a pressure sore on his kill due to the skin rubbing and lack of muscle on the breast area. Swans are large, awkwardly built birds. Mute swans are the second heaviest flying bird only to the tundra swan, with an adult male weighing in around 28 pounds! I knew our vet visit the following day would not weigh him in even close to that.

There are not many veterinarians in our area that will see a swan or know how to treat it. Fortunately we are lucky enough to have 2 within 20 miles of us. I went over and met Dr. Kathy at Dublin Vet Hospital, the veterinary clinic I had worked for the first 9 years of my career. Though the ownership and staff has changed since I left, it had always remained an exotics veterinary hospital as it was when I worked there. I loved having all types of animals to work with, from amputating a wallaby’s leg to surgically removing eggs out of a turtle. Did I mention I love to learn about all animals?

Swan, as I have gotten stuck calling him, was quite a sight even at an exotics hospital. He sat on my lap and we filled out paperwork together. Even Dr. Kathy took a double look at me walking into the room. I guess it just comes with the territory. Swan’s vitals checked out but his weight was worse than I thought. Sitting for so many months had done a real number on the muscle loss bringing him down to just 11.6 pounds. Birds are made of muscle, hollow bones and feathers. If you don’t use it you lose it. So we agreed on a plan to increase his protein intake from the 10% he was eating at the Aark to 21% protein in a waterfowl grower feed. Radiographs of his showed old fractures to the femoral head of both legs. Basically the ball was broken off the leg at the hip joint to both sides. So unfortunately this was his biggest set back from the beginning when he arrived in November. I can only say that this is exactly why the animals at Gratitude Gate get seen by a veterinarian as soon as possible to develop the best course of action for their rehabilitation. So first we need to get this boy some really good food and get him on the road to swanhood again.

The days to come would test my own knowledge and push me to know as much I could about this new species that has come to call the sanctuary home. Roll out the red carpet everyone!